Happy #TableTopDay everyone, let us know what you’re playing today and many thanks to the wonderful people of Geek & Sundry who made this happen.

So, we’ve been busy working behind the scenes on a few things we want to do this year, which you may remember we discussed in our Phase 2 post, one thing we didn’t mention was that we’re working on a TableTop game of our own.

It’s still in the early stages but we have the rules and gameplay down and will be reaching out to an illustrator friend to do the artwork for us.

The game is a mix of Pandemic and Forbidden Island and we hope to feature all those who contributed recipes as playable characters. We will most likely crowd-fund this but we’ll do it in a way that will really benefit Child’s Play.

We’ll release more details as we go along and will confirm at a later date if there will be a playable version of the game at the Invasion con in London, UK that Lee and David will be attending (not as guests), where Sandeep Parikh and Felicia Day will be guests.

For now, here’s a look at the board set-up sans artwork. There will be (hopefully) 20 playable characters, 24 tiles, 30 mission cards, 100 blue tokens and 10 red tokens. 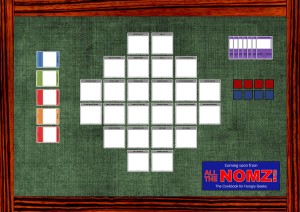